Thousands of people floating and drinking in inflatable rafts.. a bit like Kaljakellunta except its in the sea! This event is perhaps more similar to the “Stockholm by gummibåt”-event organised in our neighbouring country Sweden. Anyways, at Floatopia there has been violence, hundreds of arrests and injuries.. I guess you need to be Finnish to make something like this work without trouble?

Floatopia is a social event that has taken place in Santa Barbara, California since 2004. Floatopia was originated in 2003 by University of California, Santa Barbara students Yvonne Foletta and Christina Troutner. In early years attendance usually maxed out with 500–1,000 participants, who consist primarily of college students. The title “Floatopia” describes the main activity the event is known for—floating on rafts and other home-made or store bought floating devices along the coast and partying on the beach. Floatopia has drawn college and highschool students from all over California, although it is patronized largely by students from the Santa Barbara City College and the University of California, Santa Barbara. The title also references the word utopia, the state of ideal perfection.

Floatopia occurs at the start of spring quarter “along the beach and in the water in the 6500 and 6600 blocks of Del Playa Drive.” In 2007, Floatopia attracted just over 300 students, in 2008 it grew to almost 1,000 people, and in 2009 it continued to grow to approximately 12,000. Floatopia 2009 was so popular amongst attendees that plans were made for a Floatopia 2 to occur in May. Furthermore, various college campuses made plans to imitate the event, such as Slotopia, which was planned at California Polytechnic State University. Floatopia also popped up as a major event in San Diego after alcohol was banned on the beaches in 2008. San Diego Floatopia, taking place in Mission Bay, had grown to attract over 10,000 in 2009. Although Floatopia attracts many party goers who enjoy the event, others point out the adverse environmental effects and legal consequences related to minors and alcohol consumption. 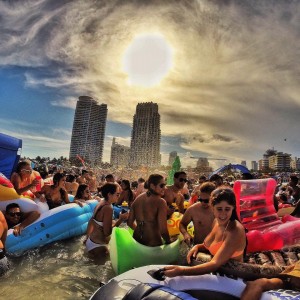