Kaljakellunta, also known as “Beer Floating”, is an annual open festival originating from the Uusimaa province of Finland, where the capital city Helsinki is also located. Kaljakellunta is an event where thousands of participants float down the Kerava/Vantaa -river in various kinds of inflatable dinghies and self-built rafts, whilst getting drunk on beer. That is also where its name originates from; “Kalja“ stands for beer and “Kellunta” for floating in Finnish. The word “Kellunta” actually stands for more than just floating, as this conjugation of the verb “Kellua” refers to an occurrence of someone floating somewhere, which is why the direct English translation sounds slightly funny. Therefore, we mostly refer to the Finnish term Kaljakellunta on this website.

Kaljakellunta has no official organiser, but its popularity has been growing exponentially throughout the years, with over five thousand participants in 2014. The event has gained plenty of international attention in recent years, and therefore the amount of tourists attending has increased significantly as well. Kaljakellunta has been criticised heavily for the mess it leaves behind every year, as the cleaning usually falls to the councils of Helsinki and Vantaa. Last year the councils estimated that the cleaning bill was over €40,000 in total.

However, since Kaljakellunta has no official organiser, it is practically impossible for authorities to ban the event. In Finland there is no law against unorganised public gatherings, and accesss to the river cannot be prohibited thanks to the Finnish “Every man’s law ” meaning that anyone may walk, swim, ski or cycle freely in the countryside where this does not harm the natural environment or the landowner, except in gardens or in the immediate vicinity of people’s homes (gardens). Fields and plantations, which may easily be harmed, may usually not be crossed except in the winter. 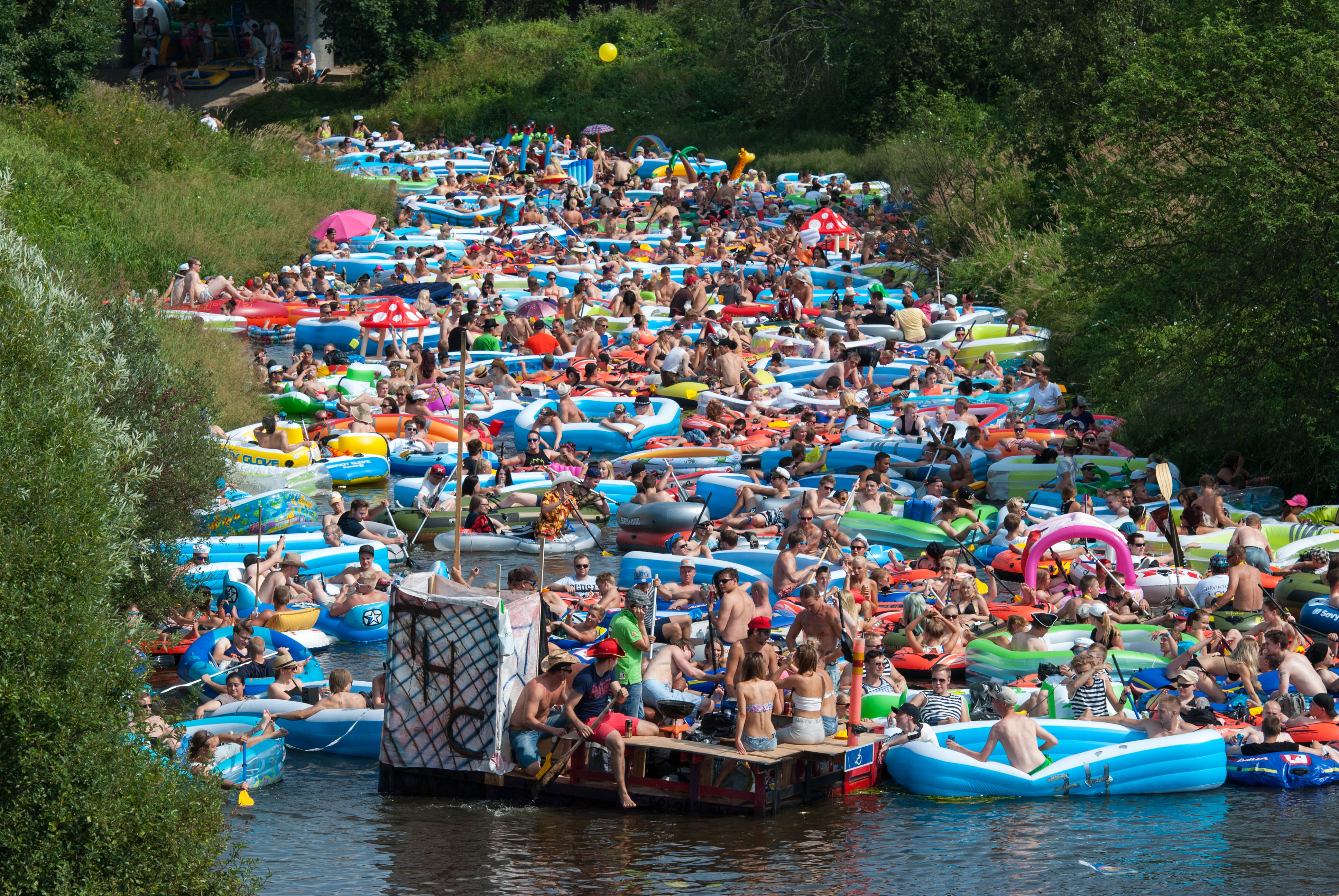 Since Kaljakellunta has no official organiser, it doesn’t have any official date or floating route either. Traditionally, the festival has been carried out yearly on either the last weekend of July or the first weekend of August, with most floaters taken off before noon. The floating route, time and date vary by year and are decided through social media websites, until an agreement is reached by voting. Once the voted time and place are known to Kaljakellunta.org, they will be published here on the main page.

As the popularity of this festival has been growing, people have started organising similar beer floating events in other towns of Finland as well, such as Oulu, Jyväskylä and Savonlinna, but these events still remain very small sized in comparison to the main event in Vantaa.

Kaljakellunta event has been organised since 1997, originating from Rekola in Vantaa. The first ever Kaljakellunta started from a rehearsal room for bands called Vokula-house, where around 10 members decided one day to float down the river in inflatable dinghies whilst drinking beer. The second year it was organised again with twice as many people and the amount of participants started growing exponentially since.

Kaljakellunta had its dedicated website from the year 2000 to 2005, until the administrators decided to dispose of it in fear of action from officials as the amount of participators had already reached thousands. The administrators were further sued in 2009 by the district prosecutor of Vantaa, accused of breaching the assembly law by organising a party without appropriate permissions. The accused referred to the freedom of speech and claimed that they had no part in organising the event, as the website was purely informational. The court ruled that the admnisitrations had committed no crime and the charges were dropped. Since the year 2011, the amount of participants has been as high as 5000 every year.